[Estonian version of the blogpost]

22 June 2018 is an important landmark in the archival cooperation between Poland and Estonia. That day Polish President Andrzej Duda visited the main building of the National Archives to open an exhibition of archival records about the historical relationships between Estonia and Poland. President Duda is the first foreign head of state to visit archives in Estonia since the creation of national archival system almost a hundred years ago and it is a great honour and respect to our archival institutions. 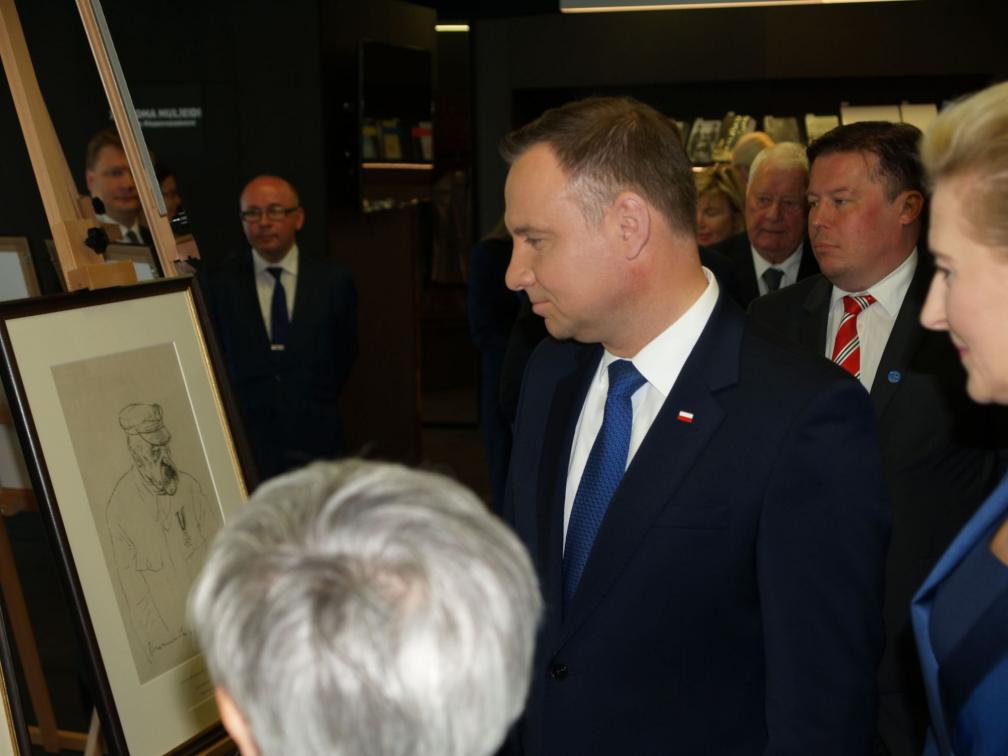 The official program at the archives started with short addresses delivered by the host, National Archivist Priit Pirsko, and the Polish Ambassador in Estonia, Grzegorz Kozłowski. This was followed by watching a selection of recently digitized newsreel films about Estonian and Polish contacts in the 1920s and 1930s. The films document the reciprocal state visits and close and active military contacts.

The most festive part of the program was when President Duda cut the ribbon in the colours of the national flag of Poland to open the exhibition in the foyer of the archives’ main building. Thereafter National Archivist Priit Pirsko and the Head of access and enquiry department in Tartu, Tõnis Türna, presented to the dignitaries the most important records. 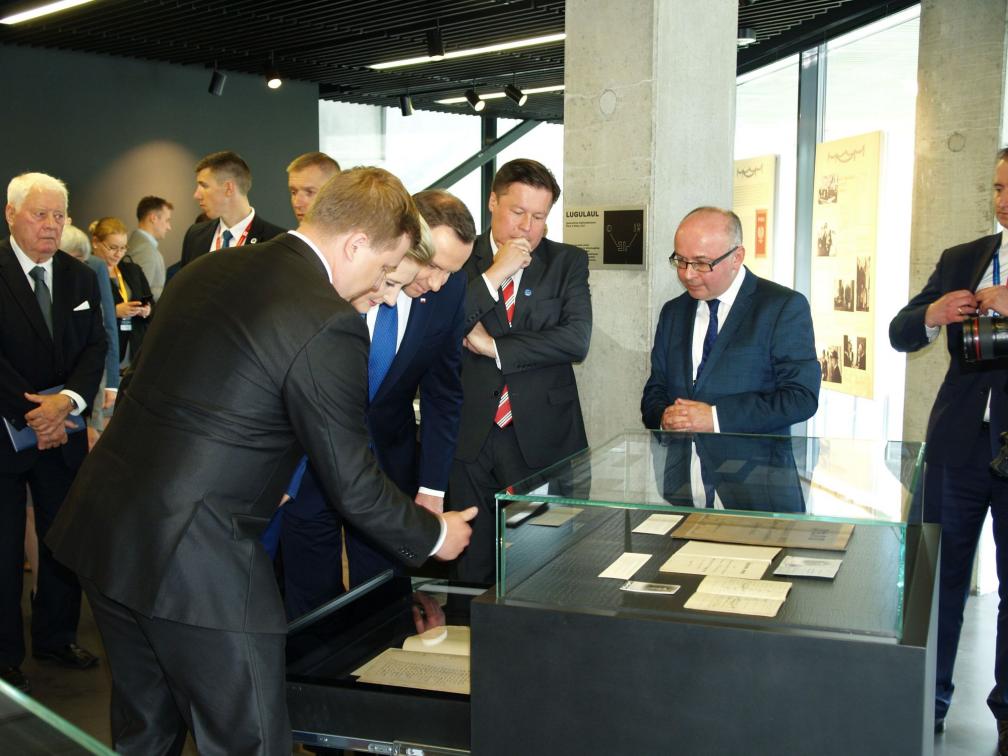 The exhibition consists of three parts:

1) Ten displays with photos and texts describing different facets of the relationships between the two countries from 1918 to 1939.

2) Four display cases with original records from the holdings of the National Archives of Estonia show, for example, a parchment in Latin signed by King Stefan Batory from 1585; resolution of the Livonian General Commission of Poland from 1599 about taxing the city of Tartu; order of the Polish-Lithuanian military commander Jan Karol Chodkiewicz to Tartu City Council to give 250 guldens for the provision of Polish troops from 1614; student files of prominent Polish students at the University of Tartu (the student file of Władysław Raczkiewicz, the first Polish president in exile from 1939 until 1947, and the student file of Bronisław Kader, a famous surgeon and medical scientist), lists of Polish farm labourers from June 1940 (those with military rank were soon arrested and sent to Tallinn’s Central Prison), documents of Polish academic and cultural societies in Tartu, and records concerning the Polish submarine Orzeł. 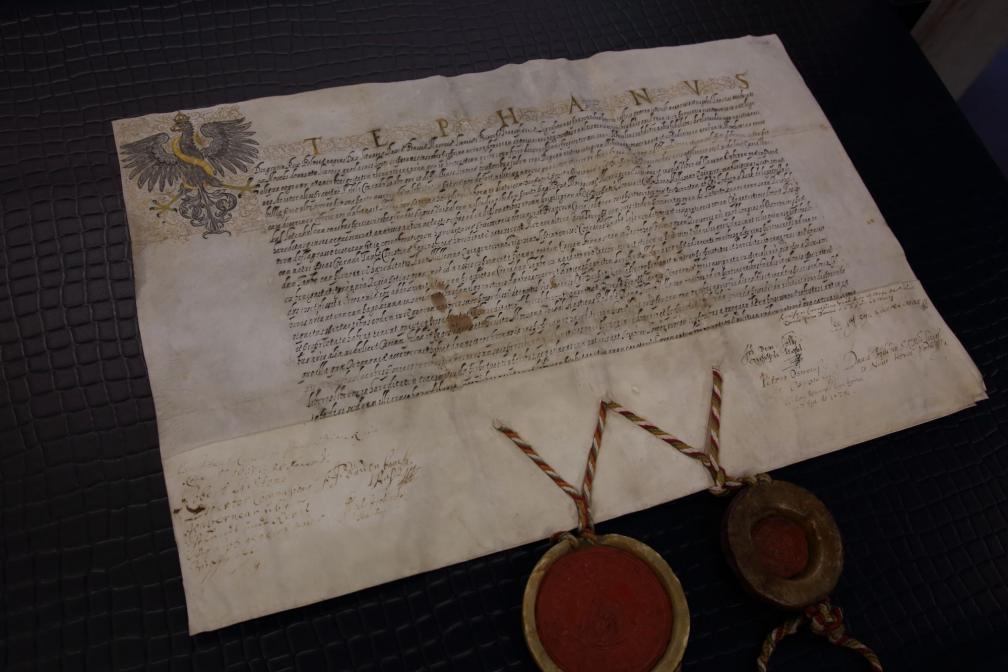 King of Poland and Grand Duke of Lithuania Stephen Báthory confirms to Conrad Taube the title of ownership to several manors in the district of Tartu. 28 February 1585, Warsaw. Parchment, in Latin. (RA, EAA.2069.2.920) 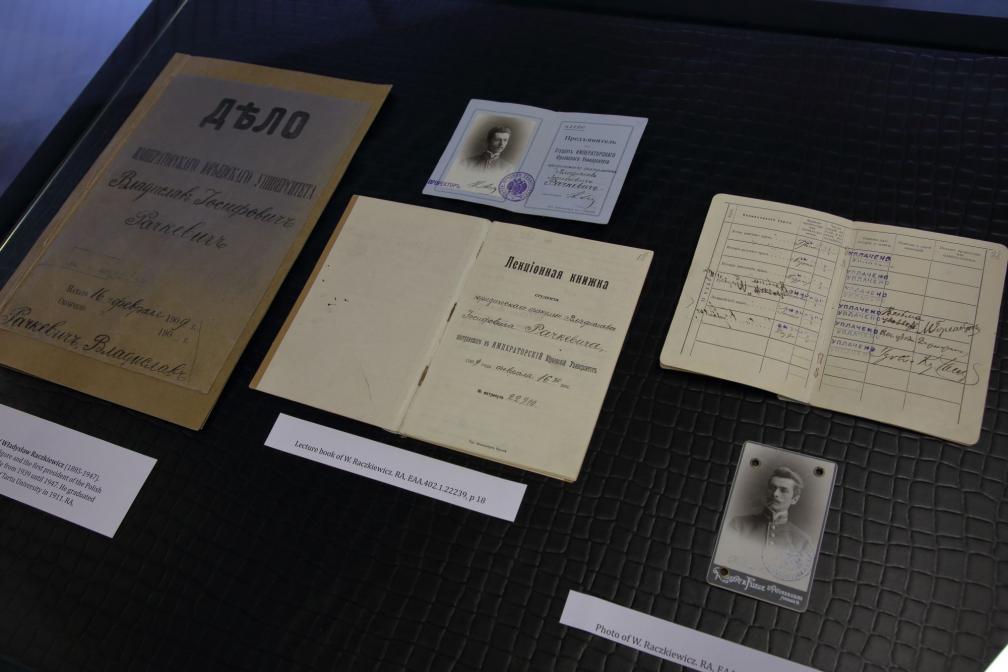 3) The most visually attractive section of the exhibition includes 12 portraits of Marshal Józef Piłsudski by Zdzisław Czermański from the years 1914 to 1935. The portraits were a gift of the Polish government to August Pulst for the military services of his brother Mihkel Pulst given over during a high-level visit to Estonia in 1935. The collection was accidentally found in a villa in Tallinn in 2014 and now it is in the possession of the Polish Embassy in Estonia.

In addition, visitors can watch the digitized newsreel films mentioned above. 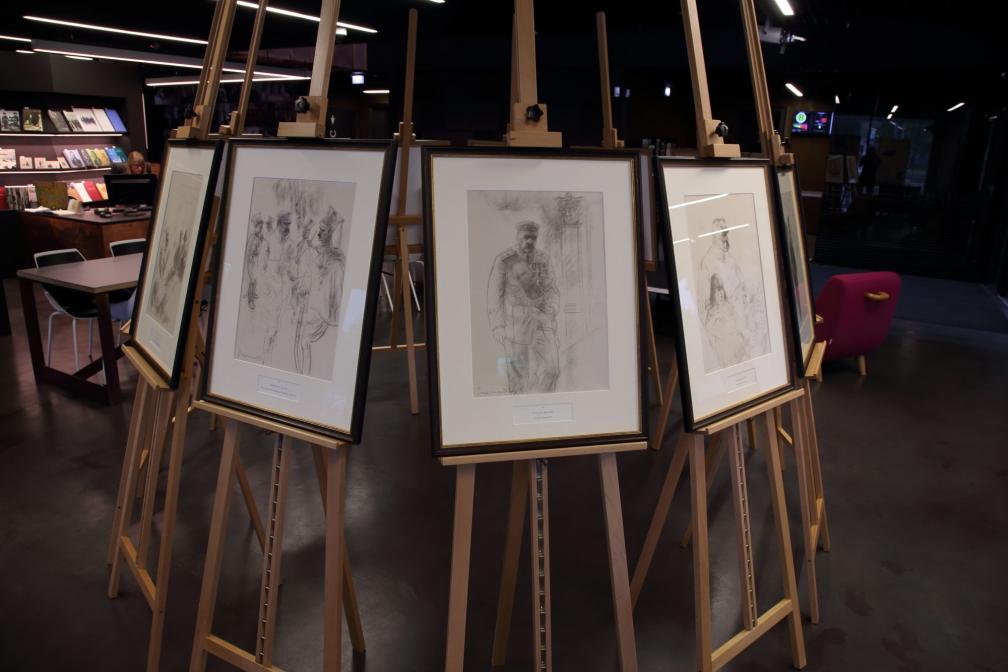 Portraits of Marshal Józef Piłsudski by Zdzisław Czermański from the years 1914 to 1935.

The authors of the exhibition are Tiit Noormets and Kadri Tooming. It was designed by Einike Leppik. Newsreel films were selected and described by Lea Tegelmann and Õie Kukk. The exhibition at the National Archives of Estonia is open until 8 August 2018.

The visit of Polish President to the National Archives of Estonia took place during the visit of seven presidents to Tartu. In honour of the Estonian centennial, President Kersti Kaljulaid invited to Tartu the heads of state of six European countries that have recently celebrated or will soon celebrate their own centennials (Iceland, Poland, Finland, Latvia, Lithuania, and Georgia). The presidents watched also the opening festivities of the 18th Baltic Students’ Song and Dance Festival “Gaudeamus“. Estonian National Broadcasting accompanied the presidents throughout the day and produced a special broadcast about their visit, titled “European heads of state at Gaudeamus”. President Andrzej Duda gave an interview to the Estonian National Broadcasting in the reading room of the archives Catch up on the ETV channel of Estonian National Broadcasting.

Cooperation between the archives of Poland and Estonia has become more intense since September 2013, when the Director General of the State Archives of the Republic of Poland, Władysław Stępniak, and the National Archivist of Estonia, Priit Pirsko, signed a mutual agreement on cooperation of the archives. Also, an exhibition “Polonica in the National Archives” was launched then, reflecting the most exciting sources regarding Poland and Polish heritage in the collections of the National Archives of Estonia. The personal files of Polish students studying at the University of Tartu during the 19th century and early 20th century (called as dorpatchiks) was the core issue in the mutual cooperation concerning digitization of archival records. From 1802 to 1918, ca 2,500 students of Polish origin studied at the University of Tartu, many of them became well-known scientists, clerks, physicians, writers and politicians while being back in Poland. As a result of the digitization project, the National Archives of Estonia digitized more than 4,700 records which were delivered to the State Archives of Poland in summer 2014.

In 2014, Ph.D. Raimo Pullat completed a book titled “Danzig University of Technology in the formation of Estonia’s technical intelligence in 1904–1939”. The research is based on the personal records of the students of Estonian origin studying at the Danzig University of Technology. The archival records are preserved in the State Archives of Gdańsk, and as a part of the research, the records of 22 students were digitized by Polish colleagues and made accessible in the web of the National Archives of Estonia: collection Estica.

Other forms of our joint cooperation worth mentioning include presentations by the representatives of the National Archives of Estonia at the conference of Jerzy Skowronek in Warsaw; participation of two conservators of the State Archives of Poland in the training (iron gall inks and photos) in the preservation units of the National Archives of Estonia in Tartu and Tallinn in 2014, and high level reciprocal visits in 2015, 2016 and 2017. In addition, Estonian President Toomas Hendrik Ilves gave several copies of our archival records as a gift to Polish President, Bronislaw Komorowski, during his state visit to Poland in March 2014. The gift was dedicated to the ancestors of President Komorowski who studied at the University of Tartu in the 19th century. The copies of the records were prepared by the National Archives of Estonia and presented as a facsimile edition in folio format (240 pages, sewn to a binding).

The National Archives of Estonia hopes that this cooperation between the archives, embassies and the Office of the President of Estonia contributes to collaboration in the diplomatic and cultural sphere also in the future. 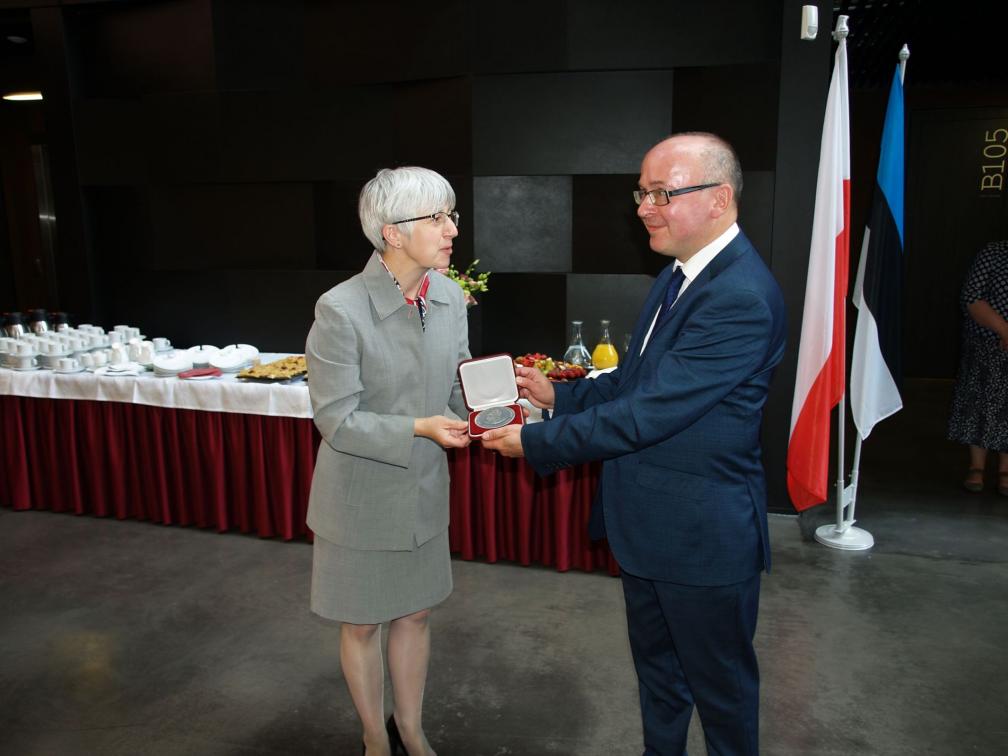 Sławomira Borowska-Peterson, specialist of public and cultural diplomacy at the Polish Embassy and Priit Pirsko, National Archivist at the Estonian National Archives