The blog post introduces the activities of the Estonian diplomats in foreign countries in the first years of independence of Estonia.
It is based on the exhibition “Letters from one century” by Astri Schönfelder.

“Unknown men from an unknown country”, so described Karl Robert Pusta the Estonian diplomats whose mission was to achieve international recognition of an independent democratic republic proclaimed on February 24, 1918 in a former Russian Imperial province. De jure recognition by foreign powers necessary for “saving” Estonia and its “happiness” was gained in 1920-1922. War-time censorship, unknown language and the underdeveloped diplomatic relations complicated the diplomats’ communication with their home country.

The correspondence of Ants Piip with the officials of the Foreign Office of Great Britain concerning the possibility to call and send telegrams in Estonian in London in 1918: 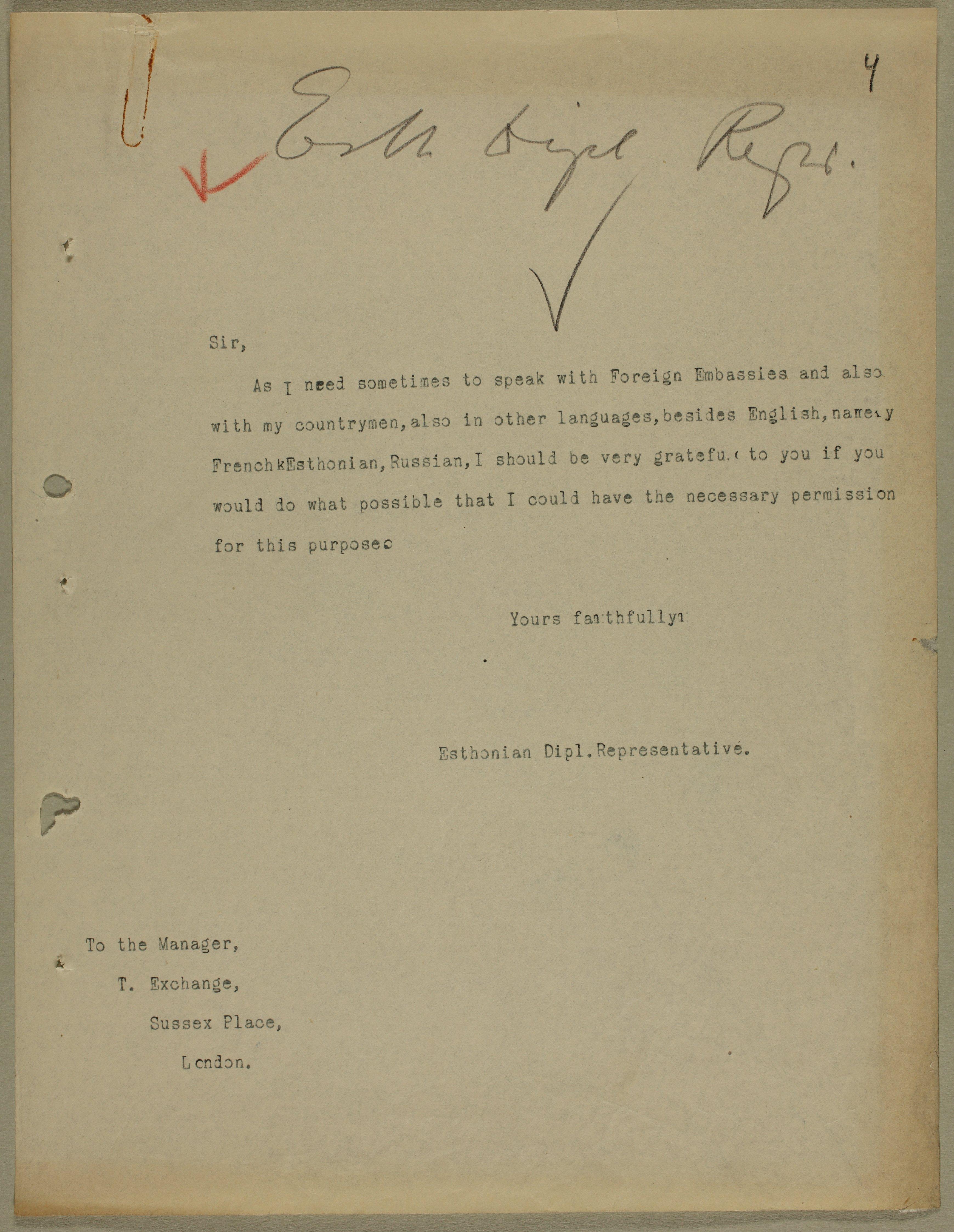 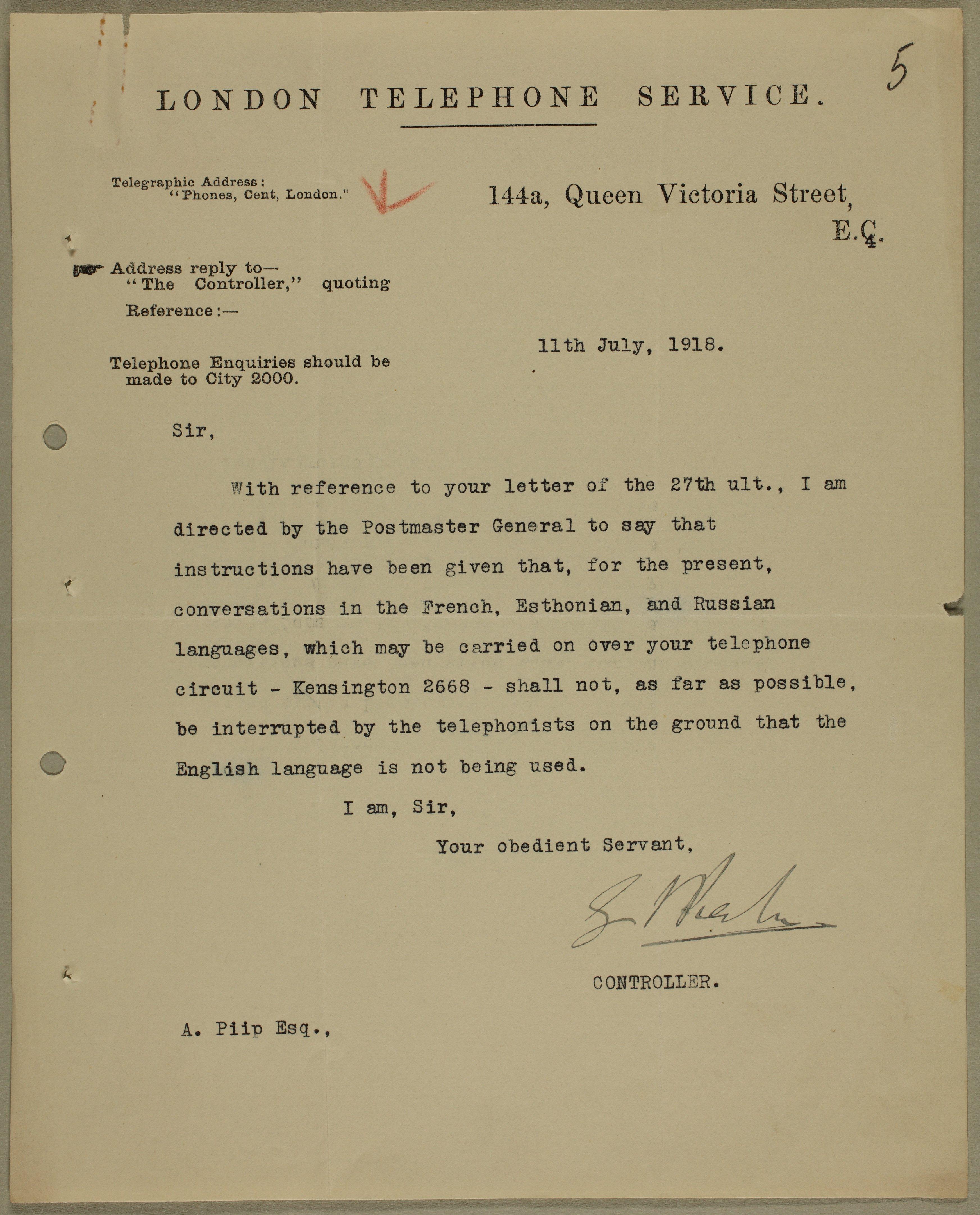 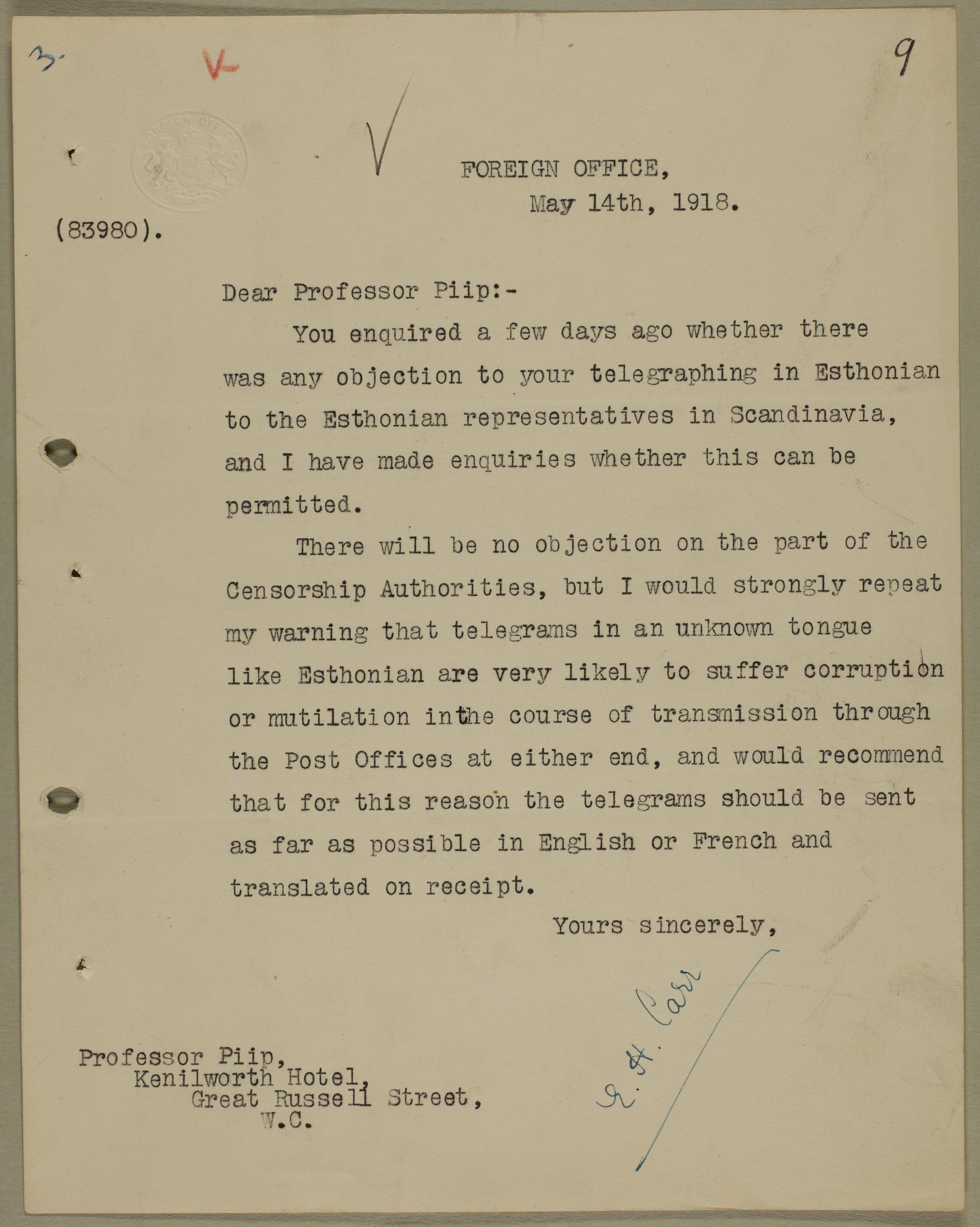 Jaan Tõnisson, head of the Estonian foreign delegation, and Ants Piip of the Estonian Legation in Great Britain explain in their protest to the editor of the Manchester Guardian on  December 21, 1918 that Estonia is not a “rebellious” province of Communist Russia: 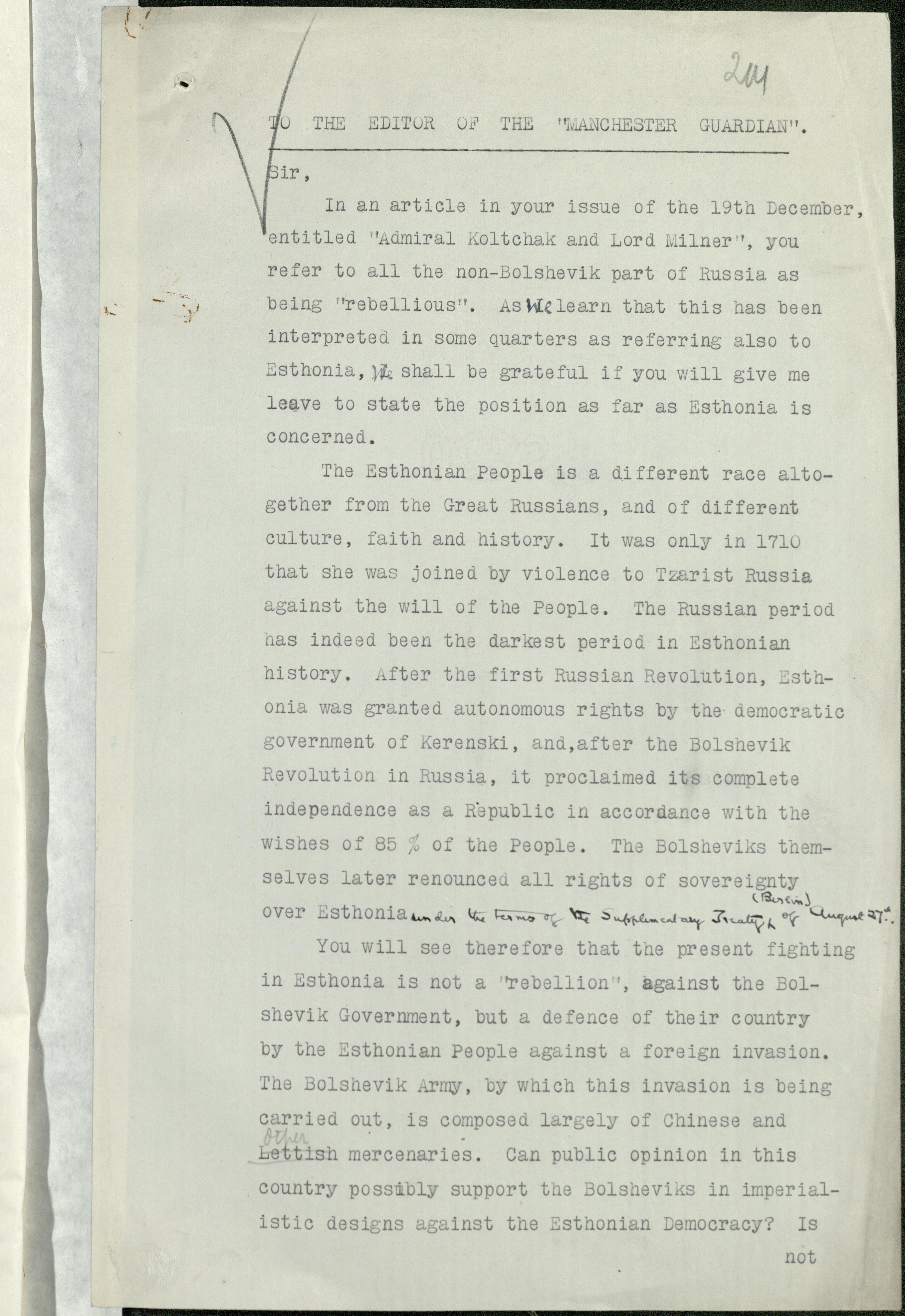 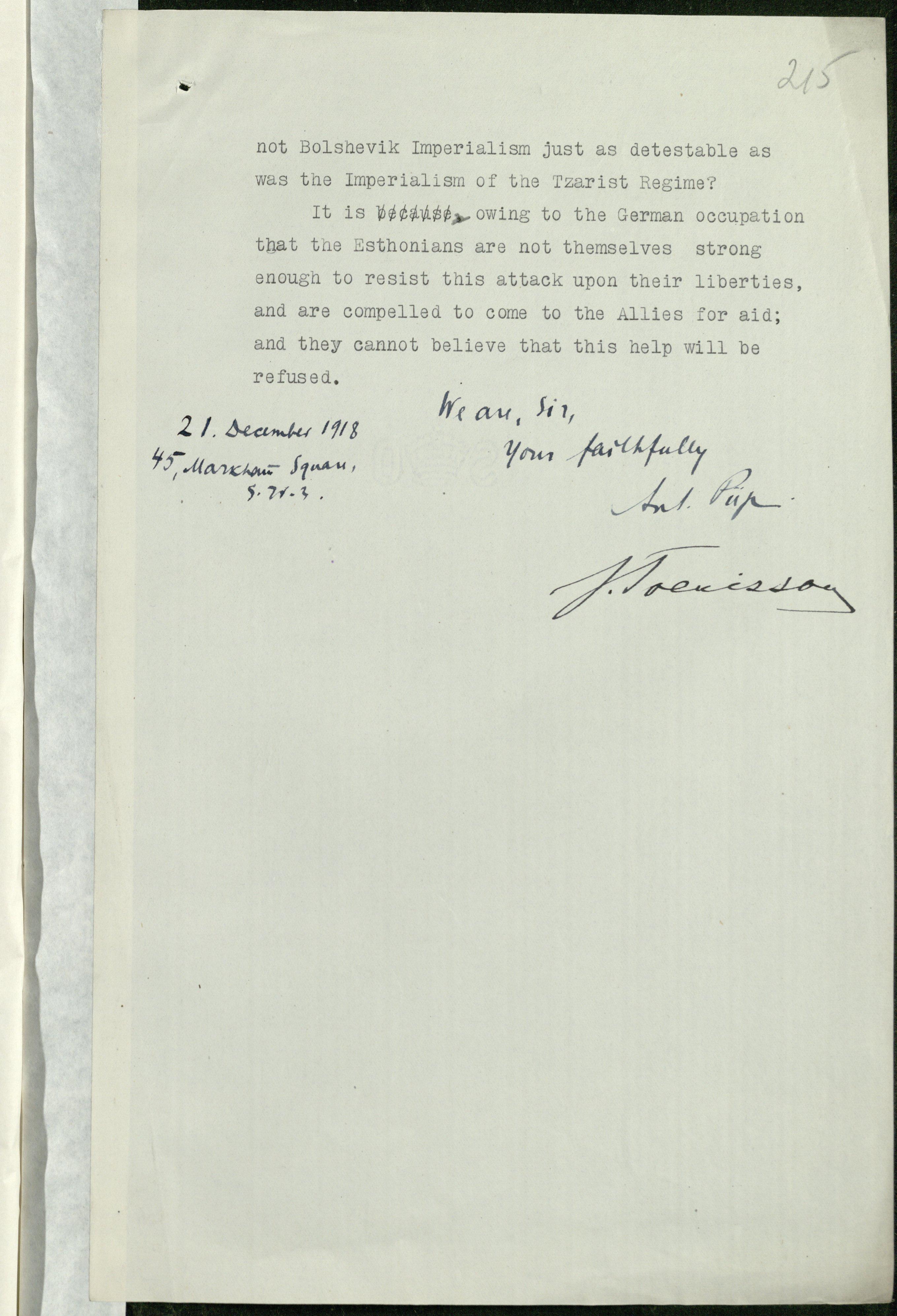 Copy of the letter of the Secretary of the Estonian Legation in London, Jaan Kopvillem, to the Prime Minister of Estonia, Jaan Tõnisson, 9 January 1920; for review to Professor Piip (RA, ERA.1624.1.7)

Dear Mr. Tõnisson,
I do very heartily thank you for the letter from December, 19, which I received at the same time with the memorandum. We have always clearly understood that for saving Estonia and its happiness we need first of all de jure recognition by foreign powers, military as well as other supplies, and credit. We have worked for that end all the time. There has not been much progress with it. We feel as if we are going to head our way through the iron wall. Your letter has given us new strength and fresh impetus to go on.

I have forwarded your memorandum to Paris and we have been informed that it has been submitted to the Conseil Suprême.

Foreign Office’s position is the same as in its letter from May 3, 1918 and in the telegram to the governments of Estonia, Latvia and Lithuania from previous September. It says that Great Britain alone will not take all the responsibility in this matter but leaves the decision to the peace conference; however, she will use all her strength to influence the decision regarding Estonia to be in accordance with the wishes of people in as much it will not harm peace in northern and eastern Europe.

Even on December 31, 1919 I was told so in the Foreign Office. Gregory says that our question will be soon discussed in Paris. He also complained that it would be difficult to convene the delegates again to the peace conference as they have departed, although many urgent questions have to be solved.

Now things have progressed so far that Lloyd George, Lord Curzon, Bonar Law, Balfour and others accompanied by numerous officials have travelled back to Paris to continue the peace conference. Also Italian Prime Minister Nitti and minister of foreign affairs Scialoja travelled to Paris.

As it is told here, the questions of Hungary, Fiume and Turkey are going to be discussed next in Paris.
I have not been able to find out what is the Foreign Office’s feeling and position on the matter regarding Estonia and Russia. […]